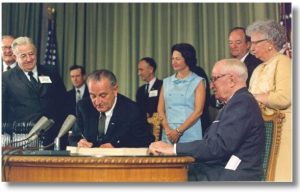 The history of Medicare begins in 1965 when President Lyndon B. Johnson signed H.R. 6675 into law in Independence, Missouri.  It was to begin providing health insurance for seniors in 1966.   The idea for a national health insurance plan actually began in the early 1900’s.  Theodore Roosevelt’s failed run for presidency in 1912 included a government-backed health plan.  Following this, various legislative proposals were introduced but never took hold.  It wasn’t until the 1940’s, that President Harry S Truman reignited the momentum for national health insurance.  His attempts in 1945, 1947 and 1949 were unsuccessful, but he laid the foundation for President Lyndon B. Johnson’s success in 1965.  LBJ acknowledged Truman’s contribution, once remarking he was “the real daddy of Medicare.”

President Truman was the first Medicare beneficiary. Courtesy of the Social Security Administration.

President Lyndon B. Johnson signed the Medicare bill into law at the Harry S. Truman Presidential Library in Independence, Missouri.  He wanted to honor the former president and the following is an excerpt from his signing speech, with former President Truman at his side…”It was a generation ago that Harry Truman said, and I quote him:  ‘Millions of our citizens do not now have a full measure of opportunity to achieve and to enjoy good health.  Millions do not now have protection or security against the economic effects of sickness.  And the time has now arrived for action to help them attain that opportunity and to help them get that protection.’  Well, today, Mr. President, and my fellow Americans, we are taking such action-20 years later.”  President Truman became the first Medicare beneficiary.

Medicare in its original form consisted of Part A, hospital insurance, and Part B, medical insurance.  It was made available to those age 65 and older.  Part A was funded by payroll taxes and Part B funded by general revenues and beneficiary premiums.  Today, Parts A and B are called “Original Medicare”.

Eighteen million people were eligible for Medicare in 1965.  There are over 60 million Medicare beneficiaries in 2020 and that is expected to grow to nearly 80 million by 2030.

The history of Medicare is marked by several important changes.  The first major change to Medicare came in 1972 and was signed into law by President Nixon.  The legislation expanded coverage to include individuals under the age of 65 with long-term disabilities and those with end-stage renal disease (ESRD) requiring dialysis or kidney transplant.

Throughout the 1980’s there were other important changes.  Medicare’s coverage of home health services was expanded, while hospice services for the terminally ill was added.  In addition, quality standards for Medicare certified nursing homes were established.

The physician reimbursement method was changed in an effort to contain costs.  Consequently, the payment to doctors was based on an estimate of the resources required to provide the services instead of the doctor’s usual charges. 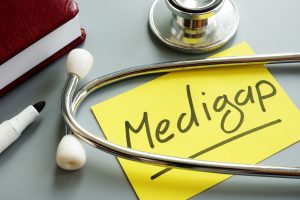 The creation of Medicare Supplement insurance has been an important part of the history of Medicare from the beginning.  Medicare was designed to protect the elderly against the acute costs of medical care.  It was not designed to provide comprehensive insurance for all medical costs or covering care for chronic illness.  Therefore, “gaps” existed in the coverage.  Shortly after Medicare was enacted, these gaps were being filled with “medigap” policies from private insurers.

Medigap, or Medicare Supplement, policies came under federal oversight in 1980.  Consumer protections for these policies were continuously strengthened as the decade progressed.  Moreover, the legislative trend was towards simplification of Medigap policies.

The 1990’s brought Medicare+Choice, which is now referred to as Medicare Advantage, Part C, into existence.  It allowed beneficiaries to enroll in an all-in-one replacement for Original Medicare.  It is insurance provided by private companies that contract with the federal government.

The 2000’s saw two more changes.  Anyone younger than 65 with ALS (Lou Gehrig’s Disease) became eligible for Medicare.  In addition, a prescription drug plan called Medicare Part D was created.  Part D can be purchased as a stand-alone plan or it can be integrated with Medicare Advantage plans.

The Affordable Care Act of 2010 attempted to contain Medicare costs while increasing revenue and increasing access to the program in some situations.  In addition, it allowed access to free preventive care.

The MACRA (Medicare Access and CHIP Reauthorization Act of 2015) legislation is the most recent addition to the history of Medicare timeline.  Part of the legislation made substantial changes to how Medicare pays providers.  The goal was to reward high-value patient care and efficiency.

MACRA also made a direct change to the eligibility rules of Medigap plans.  The goal was to eliminate “first dollar” coverage plans in an effort to reduce healthcare costs.  From the Medicare.gov website…”As of January 1, 2020, Medigap plans sold to new people with Medicare aren’t allowed to cover the Part B deductible.  Because of this, Plans C and F are not available to people new to Medicare starting on January 1, 2020.  If you already have either of these 2 plans (or the high deductible version of Plan F) or are covered by one of these plans before January 1, 2020, you’ll be able to keep your plan.  If you were eligible for Medicare before January 1, 2020, but not yet enrolled, you may be able to buy one of these plans”.

The MACRA changes to Medigap, effective January 1, 2020, will have a profound effect on the long term rate increases of the various Medigap plans. 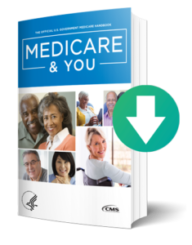 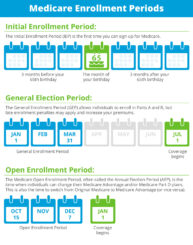 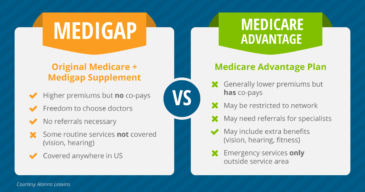